Skip to content
“You will do foolish things, but do them with enthusiasm.”
– Colette, in New York World-Telegram and Sun, 1961

I’ve only really ever been April Fooled once.  J. convinced me he’d gotten in a car wreck and when the joke played out, he quickly must have realized that he made a major mistake.  I was furious.  Quietly, icily furious.  He sucked up his laughter, groveled appropriately and all was well.

But he hasn’t tried to Fool me ever since.  She who laughs last, and all that.  Been the perpetrator/victim of any memorable pranks?

“A graduation ceremony is an event where the commencement speaker tells thousands of students dressed in identical caps and gowns that ‘individuality’ is the key to success.”
~ Robert Orben

Today makes it officially one month until J.’s graduation.  Which means that it’s only five months until we’re off to grad school on the opposite side of the country/world.  Which means we’re 14 months away from being done with school entirely.  Which means we have to grow up, I suppose.

I remember being almost entirely apathetic about my own graduation.  Granted, I just got home from a summer “study abroad” to the UK 24 hours previous to the ceremony and was jet-lagged out of my mind.  The only reason I participated in the whole cap-and-gown circus was because my parents happened to be in the country visiting friends and family and could actually show up.  They took pictures, met J. for the first time, and took us all and my godparents out to breakfast.  Fin.

Thus I’m much more excited about his graduation.  But just don’t let me think about what comes next…because there is too much to do and I’ll start hyperventilating.  Again.

“Curiosity may have killed the cat, but it sure has earned a lot of people graduate degrees.”
– Robyn Irving quotes

Yesterday was a big day, my loves.  Huge. Well, maybe just for us, but still.  Gargantuan.

We received word back from the last of the grad schools J. applied to, and he got in to all but one – which is completely fine because it’s their loss apparently.  He’s into two of the top ten schools for his program in the country, including the number one, and one of the best schools in the world!  I’m so ridiculously proud of him it’s a little dizzying.

Now, the fun bit.  I thought the hurry-up-and-wait period after submitting the applications was bad, but now we have to make a decision.  And after that we have to make a plan that includes a move, financing this adventure, maybe visas, and selling our soul (and possibly our firstborn child) to banks and governments to afford it.  That’s all a bit nerve-wracking.

“The secret to staying young is to live honestly, eat slowly, and lie about your age.”
– Lucille Ball

J. turned a whole quarter century old yesterday (geezer!). We celebrated with steak, cake, nieces, and nephews.   And for some reasons why he’s worth celebrating:

He understands that my friends and I can and will do crazy things. Routinely. And he’s always willing to come along for the ride. 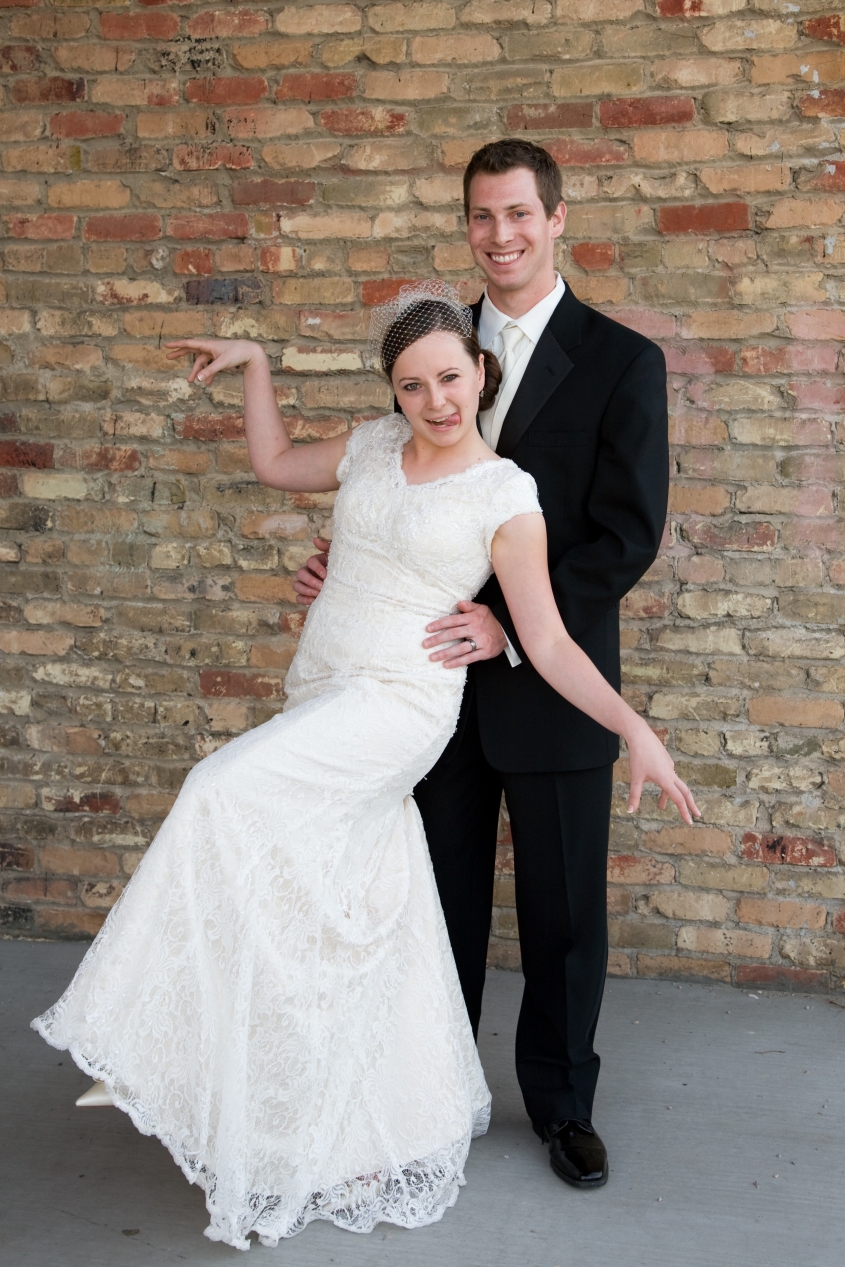 He puts up with me. No easy task sometimes.

…where J. has asked C. to quiz him on information for his business law class’ upcoming exam.  For some clarification of the following snippets, it is helpful to note that his study guide seems to have been compiled by blind monkeys tap dancing on a typewriter.  Let’s listen in, shall we?

“Name the conditions for unconscionability.”
“One party is Comcast?”
“Focus.”

“We are each of an unsocial, taciturn disposition, unwilling to speak, unless we expect to say something that will amaze the whole room, and be handed down to posterity with all the eclat of a proverb.”
– Jane Austen

He is interviewing for internships with the Big Four accounting firms this week, he also has two major tests, and tomorrow we’re flying out to California to celebrate the finalization of my brother and sister-in-law’s adoption of our little nephew.

We went to Firm #1’s reception the other night and I had an interesting time.  Early in the evening the spouses of the interview candidates were shunted off to a different room, meaning that about 99% of the women there were removed.  We all filed into a conference room where a string of partner’s wives were sitting at the front, looking very like the parish’s women’s organization presidency.  And the whole hour continued very much in that vein, which was slightly uncomfortable for everyone concerned.

Then at dinner we were seated at an awkward table, people were either trying to say something extremely clever or were absolutely silent.  However J. got to meet and ask the interviewer some questions and all indications so far are that his interview went well.

Firm #2’s reception was last night and was luau themed.  Points for food and entertainment as they had Polynesian dancers and pyrotechnics.  There was much fewer awkward silences, and the women weren’t kicked out which was a huge plus as far as I was concerned.  This time we weren’t seated and got to jostle for position to meet with the representatives, again with the requisite attempts to be memorable.  J. interviewed with them this morning, also went well.

Firm #3’s reception is tonight but I will be cleaning our house and packing for California so I won’t be able to report on that, ducklings.

However, a few thoughts!  Last year when they first started recruiting overtures, we were introduced to The Swag.  Sweatshirts, bags, all manner of stationary.  This year Firm #1 gave us a canvas tote and an aluminum water bottle, as opposed to the rather cheapish, fall-apart-as-soon-as-look-at-it ones we got from Firm #2.  But!  Firm #2 pulled ahead when won a raffle prize at their reception, styled as a collapsible cooler, actually more like an over sized lunch box, and we also got real orchid leis as opposed to the cheap plastic kind you normally get at parties.  However due to sheer bitterness, they dropped below pre-reception rankings when the guy called after us won an iPad.  Firms #3 and #4 have only given pens, a shameful showing.

Though I find it mildly weird that both J. and Margot mentioned this to me on the same day…I can’t help but wonder how many problems in this world could have been avoided if we all had one of these:

“I want to make Korean food this week.  Let’s to to the Asian market.”
“I just got back from the store.  You can go get things without me you know.”
“I like to go with you.  You tell me what I can and can’t buy.  Because I’d come home with Korean marshmallow pies and you know it.”
– C. and J.

We do and buy strange things sometimes.

J.’s been into a new exercise regimen recently, and after begging me for a few days for a pull up bar and finding a good deal on one, I gave in.  Naturally one thing led to another and now our house looks even more ghetto as he had to take off the door to our office to use it.  I resisted that for a couple of days too, but since I have my bike sitting pretty in the front room I had lost the aesthetic appeal already and didn’t have a leg to stand on. But as he works out everyday and I ride my bike faithfully (for an hour yesterday, kittens!  My legs are jello!) I suppose the loss of a door is alright.  Except when company comes over.

Then,because summer arrived quite suddenly this year–we went from snow to heat in mere days, what gives!–I realized, as I do every year, that I was dying.  I didn’t own a single pair of shorts.  So I marched into Old Navy and bought a stack.  Jupiter, Odin, and Quetzalcoatl, what have I been missing?!  You mean wearing these things makes my legs that much less glow-in-the-dark white, and keeps me cool?  What has a professional-only wardrobe done to me?!

Finally, while doing the grocery shopping yesterday, I came across almond butter.  I’d read of its awesomeness here at Thinspired, and from various health conscious friends and so snatched it up.  Go.  Buy.  This.  Stuff.

“For the record, I hate it when people do things to celebrate ‘future mothers’ on Mothers’ Day, like giving out flowers in church, so I don’t want to do anything with the holiday until we actually have kids.  However, if I’m pregnant on Mothers’ Day, I will expect you to do something, in the name of the fetus.”
“Duly noted.”
– C. and J.

While kids are a long ways off for us, we do have fun thinking about, arguing over, and speculating on our future family.  “You know you can’t swear in front of the kids, right?”,  “They will learn proper grammar, so help me!”, and “Piano lessons and a language are mandatory, ok?”  He looks forward to wrestling with them on the floor and playing catch, I look forward to answering questions and watching them discover the world.  And forcing them to read (though with us as parents, I don’t foresee too great a struggle in that vein).  I like to tease him about how, by marrying a petite woman like me, he’s forfeited his chance at a child playing basketball, and he counters that he’s switched his plans to baseball.  He takes a great deal of pleasure in shooting down all my potential baby names, and I smugly let him think what he wants because after nine months toting the little parasite around, gaining weight, going mental, being violently ill, and forcibly expelling it through a grueling multi-hour ordeal, I think I’ll manage to get the final say.

However, we are firmly on the same page regarding one thing about children: slave labor.  Oh, yes.  They will have chores.  Starting young.  It’s going to be fun to make them pull weeds, mow the lawn, and dust the house.  Mummy loves you, darlings! 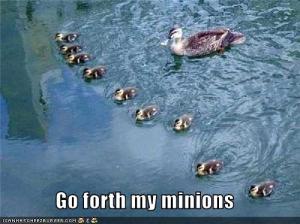 Round about finals, we all get a little loopy.  J.’s schedule affects me just as much as it does him because we only have one car so where one goes, the other must follow.  Meaning, that because J.’s exams start at 7am, guess who also gets to come into work an hour early?

The disruption to our sleep schedule means that C. becomes a walking zombie of ludicrousness.

Our flat hasn’t been cleaned in over a week, I reach a point of exhausted hysteria by 9pm every night, I can’t speak properly, the smallest and most basic tasks become incomprehensible, and I have a perma-migraine raging behind my right eye.

But I knew I’d reached critical mass last night when driving home from my sister-in-law’s (Milly) bridal shower (her fiance spent his evening with the future-brothers-in-law and assorted children), J. was talking about his friends, “Tim and Heidi,” and I furrowed my brow in tired confusion.
“Wait?  Tim and Heidi?  As in Gunn and Klum?”

Sidenote: do they not (his friends, I mean) have the potentially most awesome Halloween costume?