“My dad used to say makeup was a shallow girl’s sport, but it’s not. It’s armor.”
― Courtney Summers, All the Rage

Back in April, as part of my Style Month project, I shared several months worth of empties–the products I’ve used to the last drop. I remain pleasantly fascinated with empties videos or posts from other writers and of course, I’ve been on a bit of a kick when it comes to thinking and writing about consumption myself. So obviously as soon as I had hit publish on my last post, I began stockpiling items as I used them up for an update. Six months later, it’s time for an update!

I’ve bought very few new products in the last half year and so have been able to use up quite a few things to learn more about what I like, what I hate, what I swear by, and what I think is just not worth the money. 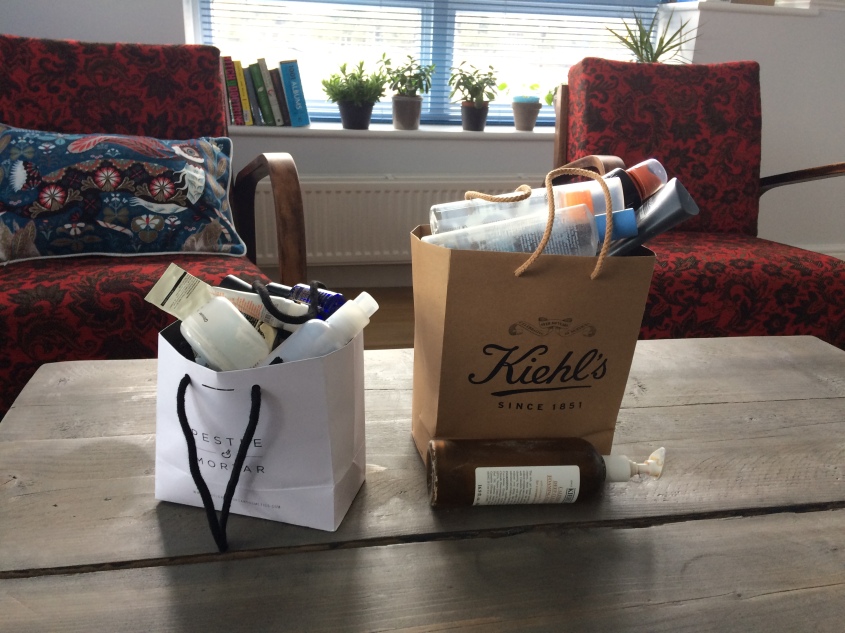 Not too bad, C., you may say. Seems manageable until you– 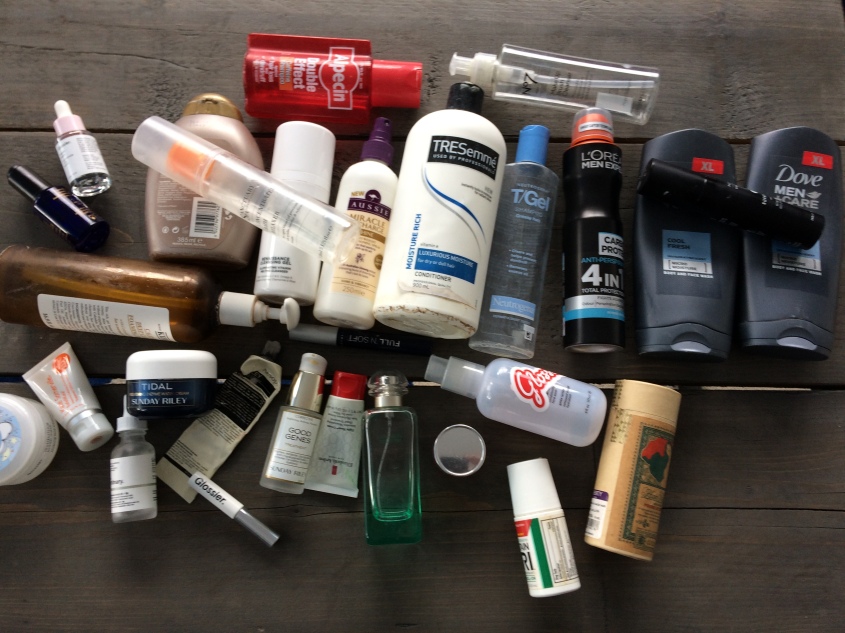 Oh god, what kind of monster am I?! 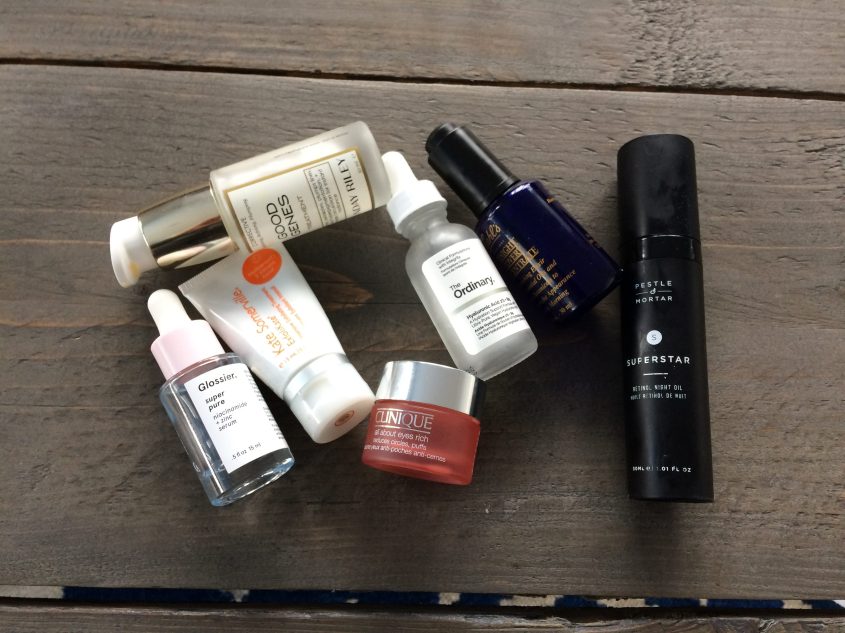 Skincare first! There were quite a few repeats in here as this is my second bottle of Sunday Riley Good Genes, at least my bottle third Kiehl’s Midnight Recovery Concentrate, my second Clinique All About Eyes Rich eye cream, and third Kate Somerville ExfoliKate scrub. All of these are beloved favorites, but I’ve made a commitment to use up much more of my own beauty stash before I allow myself to repurchase any of these items (particularly as they aren’t exactly cheap). You may be surprised to hear that I dislike a Glossier product, but their Super Pure formula is my least favorite of their three serums and I wouldn’t repurchase it. The Pestle & Mortar Superstar retinol oil was excellent, but I’m road testing a much cheaper version from The Ordinary which thus far I really like! Speaking of, I also finished off a bottle of hyaluronic acid serum from the The Ordinary displaced another Pestle & Mortar similar product as well. Quality doesn’t need to break the bank, kids! 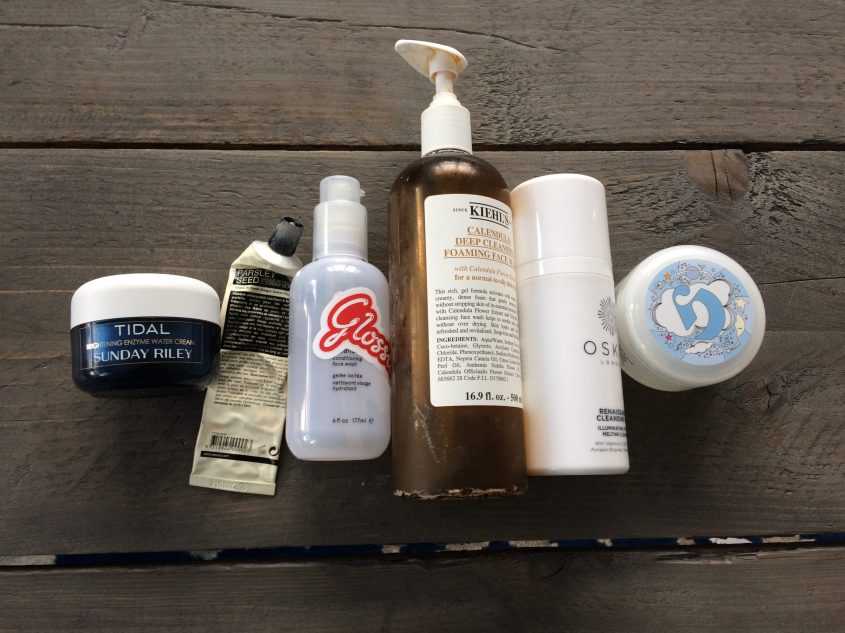 Another bottle of Glossier Milky Jelly cleanser down. I already had a bottle of this on stand by that I purchased over the summer, but I’m ridiculously lucky and got two free additional bottles from attending the Glossier pop up earlier this summer, and then scored another back up as the G-team apparently mailed out some gift boxes as follow up to that press event later in the summer. Because they are freaking brilliant at marketing. Long story short, I haven’t had to repurchase this in a while, but I fully intend to when my stash runs down again. It’s a really good product, perfect as a morning cleanser or a second cleanse in the evening (if I’ve been wearing a full face of makeup and SPF all day). My evening cleanser for months has been the Oskia Renaissance Cleansing gel–a gel/balm formula that turns to oil on your skin. It dissolves most makeup and doesn’t strip your skin in the slightest. The Kiehl’s cleanser has been included in this stash for the sake of honesty. Technically it was Jeff’s product but I made liberal use of it in the shower and contributed to its demise–so into the bag it went! I’ve used up two masks, the Aesop Parsley Seed mask and Moisturizing Moon mask. I may repurchase them someday, but I want to try some similar products from other brands first…once my current mask stash is depleted. I definitely would not repurchase the Tidal cream by Sunday Riley–odd smell, nothing special as a moisturizer, and sparkly flecks in it to boot. 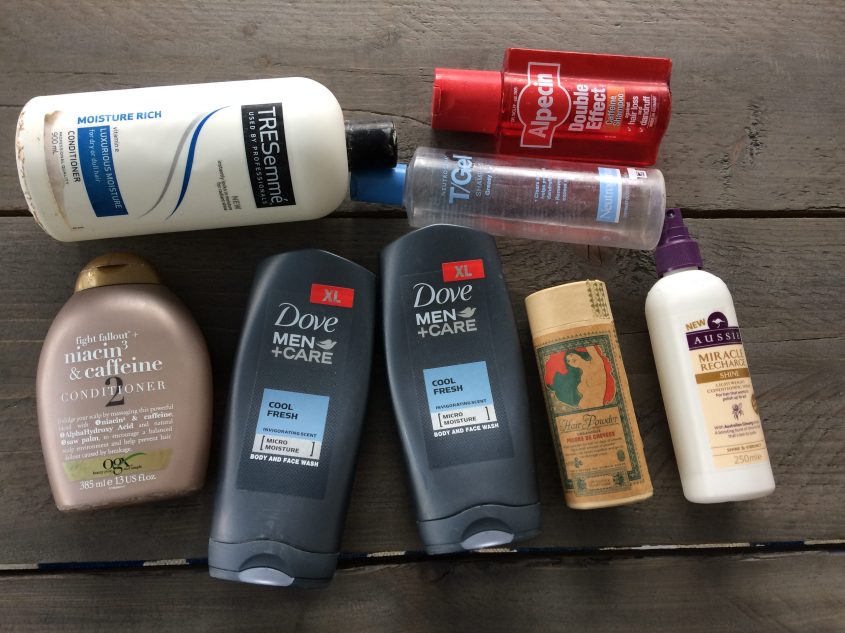 Hair continues to be my personal Waterloo, but here are some of the mane-taming products I used up recently, along with a couple of shower bits. I’m not precious about my bathing and use Jeff’s razors and bodywash without shame. In fact, I’m positive I missed at least two bottles of bodywash that rightly should have been included in this confessional but recycled them first. Oops. My eczema continues to wreak havoc on my scalp, hence the two different medicated shampoos (also probably not an honest reckoning), but I did manage to make it through two bottles of conditioner. A powder style dry shampoo and leave-in conditioner round off the pack. The powder smells wonderful but I would not repurchase as I’ve found a much better spray formula. All the other items, however, are pretty much my standard shower rotation and their replacements are in situ. 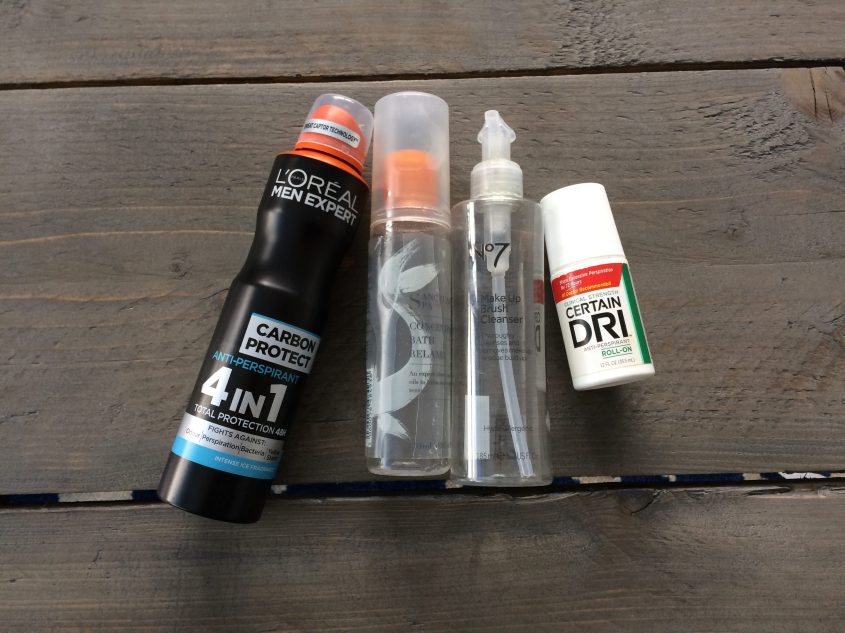 While we’re being honest, that comment about stealing Jeff’s face wash? Same for deodorant. I just don’t see the point of the pinker, lady-friendly stuff when he has a perfectly good can of product sitting on our dresser that I can swipe. The Certain Dri roll on, however, is definitely mine. Also in the spirit of full disclosure, this stuff is fantastic and when I use it regularly/properly, it’s a miracle product. I tend to pick up a bottle whenever we go back to the States. I also used up a No 7 make up brush cleanser from Boots (great product!) and a bath oil from Sanctuary Spa. I take a bath almost every night, especially in cold weather and prefer oils to bubbles…even if it means I have to scrub the tub more regularly. It’s a small price to pay for zen. 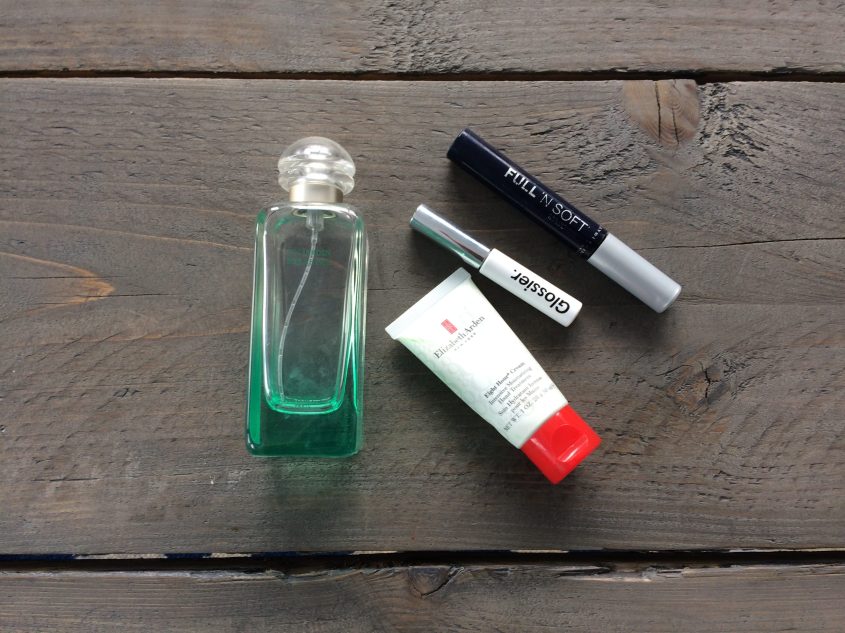 Finally, some make up! Er, kinda? It takes me quite a while to get through make up products, though you may remember my recent discovery of the MakeUp Rehab reddit community which has inspired a number of “use it up” personal challenges for me. If I do another post like this six months from now, I’m hoping to have a few empty makeup tins and pans to add to the pile. This time at least, I made it through yet another tube of Maybeline Full ‘N Soft mascara–my go to for years. Glossier Boy Brow did good service in the beauty wars and its replacement is already in rotation. I loved this hand cream from Elizabeth Arden and will definitely be buying a full sized tube once my seemingly infinite amounts of other travel sized lotions have served their time. Finally, I used up a bottle of Hermes Jardin sur la Nil perfume which I loved but am happy to part with as friends after a four year run.

Your turn, kittens, if you feel up to oversharing in the comments. Do you keep track of items that you use up–if so, what and why? Is my fascination with personal consumption at all interesting or just weird? Let me know your thoughts, I’m braced for impact!

You have been notified.
Foxglove love!
Huge love to my brother @johnicusprime and newest sister @madskosman ! I hate the stupid world mess that kept us from celebrating with you, but so so thrilled for your happiness. Can’t wait to party with you both in person. You’re both too pretty for words!
Freezing rain the blazing hot in a week. Never stop doing you, Britain!
🤤
Never not here for bees in blossoms.
It’s cinco de mayo and I’ve just been hailed on. The great British summer is upon us!
And no credit to the cat, typical.
The three genders.
I always feel like somebody’s....
Outside again, with (blue) bells on.
I have emerged from two days of an aura migraine (first in months) and feel the need to remind myself that I’m alive. Also to make up for several days lost calories. Tonight, we feast!