“It’s May, the lusty month of May
That darling month when everyone throws self-control away
It’s time to do a wretched thing or two
And try to make each precious day one you’ll always rue.”
– Camelot

Piglets, another month has flown by and what a month…

Look, the world continues to be a wild ride but we all of us get by with a little help from our friends, small luxuries, cosmic vocations, or funny memes on the internet. You do you, beloveds. Here’s a short list of the things that made the lusty month of May a bit less angst-ridden than it otherwise could have been. Share your own sanity savers and favorite things in the comments and let’s chat about them!

I know, I know, I need to do a proper blog post about it and I’m long overdue but this month I finally got to see Pompeii and my little nerd heart could barely contain itself. The child of a classicist and one of a clan of history buffs, this has been on the To Do list since I was about five years old, but it’s still difficult to express how blown away I was by the completeness of the site. Many archaeological sites are fractured or so eroded that piecing together its mysteries is the work of a life time. Pompeii really is a time capsule tucked under the pseudo-benign shadow of its resident volcano. Please enjoy X’s snap of my general mood above.

Chernobyl, by HBO and Sky Atlantic

This miniseries is only five episodes long but is probably the most compelling “horror” piece I have ever watched. Twenty minutes into episode one and my whole body was clenched tight, the dread and slow-dawning fear was that palpable. It recounts the famous nuclear disaster, with an emphasis not so much on the science as the psychology of what it meant for those in the literal blast zone of an unprecedented catastrophic event with millions of lives at stake. The way the series is structured (the first episode recounts mere hours and each chapter encompasses more and more time as the long term consequences become more apparent) is masterful and not a single shot is wasted. It’s beautifully constructed and absolutely gripping. What I found so compelling was the portrayal of so many powerful people in the wake of the immediate aftermath being not just unwilling but in some cases literally unable to comprehend the facts on the ground when it didn’t correspond to their preferred narrative. The use of narrative–what nation states and individuals tell themselves and each other–is the key theme of the series, specifically why and how people lie, and especially when we do it collectively. Even though it’s telling a story over thirty years old, it feels horribly relevant. (A secondary recommendation is the accompanying podcast by the showrunner and NPR’s Peter Sagal about the background and making of the show. It’s excellent.)

What a gorgeous, generous book this collection was. Taken verbatim from Strayed’s now famous turn as an advice columnist (she’s still doing the gig but now in podcast form), what struck me most in reading her thoughtful and intensely personal responses to the questions her readers placed in her keeping was a deep sense of kindness. Whether dealing with toxic relationships, existential crisis, tragedy and loss, or perseverance, each of her essays are masterclasses in conveying care for her correspondent. I realized in reading the book how few expressions of generosity and kindness I see in most of my culture intake. It’s a vastly underrated thing and while she makes it look easy, I have come to believe that genuine kindness is actually very hard to do. Which is probably why all major religions advocate for it on some level. I’m behind on my reading goals for the year, but I swallowed this book in two sittings over a weekend. 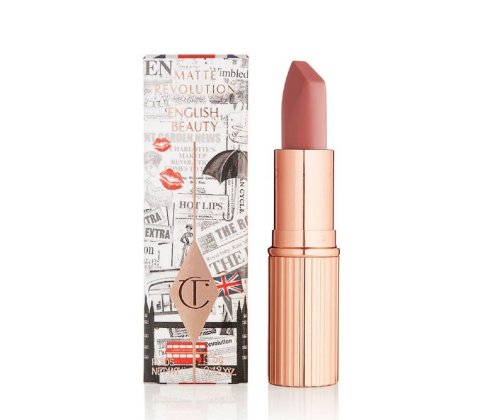 Who am I? What am I? What have I become?! Yes kittens, this month I’ve traded in my customary red lipstick for a limited edition nude lipstick by Charlotte Tilbury. A much beloved makeup artist, she launched her eponymous line a few years ago here in the UK and more recently it made its way to the US and elsewhere. The aesthetic of her brand is distinctly glam, and while that’s not really my preferred style, her lip products are to die for. I can recommend her matte formula as one that produces a velvety, opaque color on the lips but does not dry them out or flake as other mattes tend to do. This particular shade is limited edition, but I’m not a person who hoards her rare or expensive products, waiting for the “perfect opportunity” to wear them. Life is short, makeup is perishable. Wear the damn nice stuff!

This month I dashed off to Italy with X before she started an amazing new job and celebrated Hannah’s upcoming novel with her from afar. A good friend from work announced her pregnancy. Long phone calls, hilarious text chains, great coffee dates, and many a meme were shared. Girl gangs really are the best thing ever created.

4 thoughts on “Five Things I Loved in May”