Skip to content
“What you see before you, my friend, is the result of a lifetime of chocolate.”
― Katharine Hepburn
Best saved for last, kittens!

This is another Portobello Road find, which Jeff and I literally stumbled across on a side street while trying to avoid tourists. A charming young man was standing outside the shop with samples, and it would have been rude to turn him down. After which it would have been rude not to go in and buy something because, ducklings, this store is incredible.
Alexeeva and Jones is a self described ‘salon du chocolat’ which brings some of the world’s top chocolatiers into one place. The shop occupies some prime real estate on Westbourne Grove in Notting Hill and each chocolatier’s work is beautifully presented to an admiring public. Without doubt these stunners are some of the most visually gorgeous foods I’ve ever seen and photos don’t do them justice, but here are a few anyway. 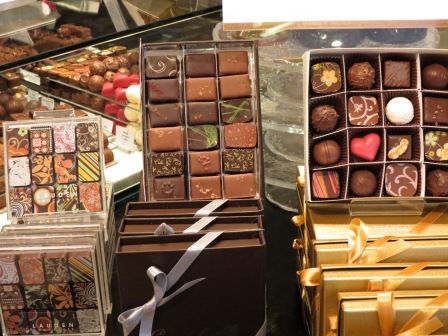 This woman is an utter delight. She’s served me both times I’ve been in (the second time, obviously, to purchase goodies for our Christmas stockings). She is so unabashedly enthusiastic about her work, and is one of the most genuinely friendly salespeople I’ve ever come across in my life. Between personal recommendations, descriptions of the various chocolatiers’ signature styles and flavors, and being generous with the samples, she’s the girl you want waiting upon you while you browse. 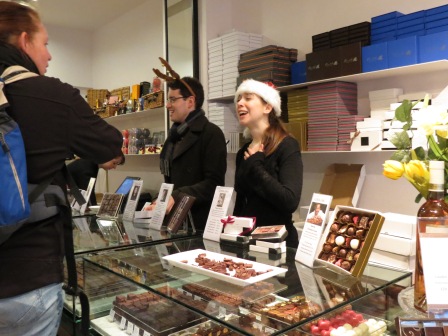 So, when you come to visit me in London, after we’ve bought you some tweed, we’ll recover our equilibrium by choosing some of the strangest and loveliest confectionery available. May I personally recommend the sea salt caramel with mango and coriander? You’d think it would be awful, but it’s just the nicest thing imaginable.