“As a general rule, I don’t plan to travel with my Oscars, but we may have to make an exception.”
– Paul Higgins

Are you sitting comfortably?  Then let’s begin!

I can already tell that there’s going to be some debate about the gowns from this year: there were few gowns that were outright offensive so most everybody is going to like something that their best friend hates.  Across the world tonight, girlfriends are choking on chips, spraying their drinks across living rooms, and demanding of one another, “Are you serious?!”

Ah, que sera sera.  Taste is a tricky biscuit and it can be even trickier trying to make up your mind on whether or not you like something, especially while celebrities are being passed around like hors oeuvres.  Share you thoughts in the comments, minions, and let me know how violently you disagree with me.  Or, alternatively, back me up.  That’s fine too. 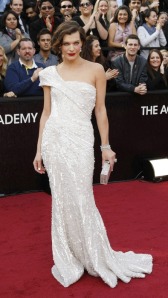 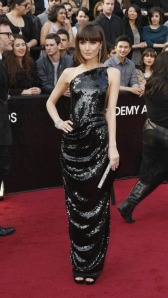 – Mila Jovovich in Elie Saab, looking elegant, a la Old Hollywood.  It’s sad when a presenter looks better than several of the nominees.
– Rose Byrne in Vivienne Westwood, very much New Hollywood in slinky black.  Although, honey, you should really lose the earrings, they do nothing for you. 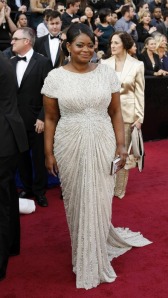 – Olivia Spencer in a ravishing Tadashi Shoji looking elegant and ladylike, and itching to snatch up that Best Supporting Actress, which she totally deserved.
– Emma Stone in Giambattista Valli Haute Couture.  I like to think she wore this dress because someone told her that she couldn’t pull it off with her coloring and she said, “I had a really great green dress picked out but y’know what?  Watch me, wenches!”  Also, I felt bad for subjecting you to so many black and white dresses.  But clearly not bad enough because speaking of… 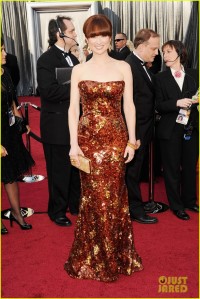 – Sandra Bullock goes to her old standby Marchesa, and for a reason.  This picture makes the top look a bit wonky, and anyone who wants to claim that Marchesa over-embellished may do so, but I maintain Sandy looks fantastic.
– Ellie Kemper in Armani Prive.  Her hair and dress match and I hate this (as you will see later on in this post, and you may point out my hypocrisy then), but I think the color is lovely.

The Meh/Tell Me What To Think

– Viola Davis in the first controversy of the night: this green Vera Wang, and longtime readers know that I love a good green.  I’m conflicted because the color is throwing me, it’s looking a lot brighter in pictures than it did on the TV for me.  Am I crazy?  I also don’t love what’s going on with her boobs.  Speak up, is the Small Dog team judging this one too harshly?
– Maya Rudolph in Johanna Johnson.  I had to show the back of the dress to explain why I’m not fond of it.  I loved the sparkly sleeves, I could even do the belt, but the back was over the top for me.  The assistant charged with taking the bedazzler away from the designer was clearly on a coffee break. 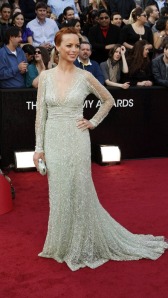 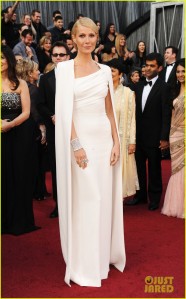 – Berenice Bejo in Elie Saab.  I wanted to like this more than I did.  I thought the hair was fun and the clutch was lovely, but I can’t make up my mind on whether or not the color suits her, mostly because her face seems significantly differently shaded than the rest of her…
– Gwyneth Paltrow in Tom Ford.  I don’t hate it and Margot’s screaming, “Stormtrooper!” at the screen.  Neither of us want to be responsible for this one so I’m throwing it to you.  Capes: In or Out?

– Angelina Jolie in Atelier Versace.  I usually love her choices, but there’s something off about this one.  The proportions maybe?  The bunching of the velvet?  The way her hip seems to be completely out of joint in this picture combined with that feral smile?  Make up my mind for me, darlings.  I think she’s a Scarlet O’Hara for the 21st century: velvet drapes, no thread, 10 minutes, voila.  Which isn’t of course to say that it’s bad.  The bad follow here… 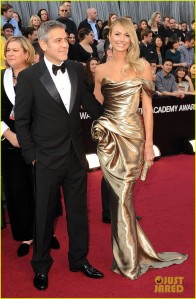 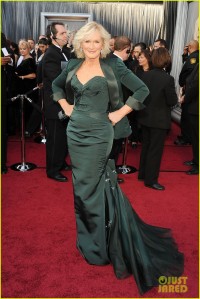 – Stacy Keibler (who I could not find a solo picture of, but that’s fitting since her entire job here is to be Clooney’s arm candy and try to bring him luck by dressing like an actual Oscar award) in Marchesa.  This could be pretty on another of Clooney’s flavors of the month, but her skin, hair, and frock all match.  Unacceptable.
– Glen Close in a badly fitted Zac Posen.  And drat, I’m torn on this one too.  It’s looking a lot better in this picture than it did on the red carpet.  Still don’t like it.

– Rooney Mara has been campaigning for this Oscar in character all season, no one will be less surprised than me if it turns out she’s actually the preppiest, frilliest, laciest girl that ever was.  But back to business, she’s wearing a Givenchy that has its good points, but (a common complaint tonight) does weird thing to her boobs.  Watching her move down the carpet was painful, it looked as if she could barely walk in it.
– Melissa McCarthy  in Marina Rinaldi. So close, should have lost the cape (capes and boobs, tonight, who knew?), would have upgraded this significantly. 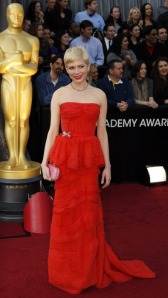 – Mary O’Donnel wearing who-gives-that-thing’s-hideous!
– Michelle Williams.  This is another one that I expect to be run out of town for: I know peplums are all the rage, but I the layers of fringe just don’t do it for me in this Louis Vuitton.  Margot concurs – “Peplums are the devil!” are the words I believe she used.

Jessica Chastain in Alexander McQueen.  Shutting.  It.  Down.