“Do you just constantly have your own little side adventures?”
“Yep.”
– Troy and Abed, NBC’s Community

Jeff likes to tease me that I stumble across random historical and cultural things by mistake. He calls it, “leading him into wardrobes,” which I take to be a high compliment. But some of these adventures take the most pleasant of odd turns. Take for instance this charming little house nestled into a quiet spot near Shakespeare’s Globe Theatre on the south bank of the Thames.

Exactly the sort of historical house I’d love to buy if I had pots of money. It had caught my eye before on many of our Thames strolls, but one evening I decided to wander closer (deaf to the dire warning of Jeff, who said I’d be arrested or at least scolded for venturing onto private property). Which is when I caught site of the stone inscription: 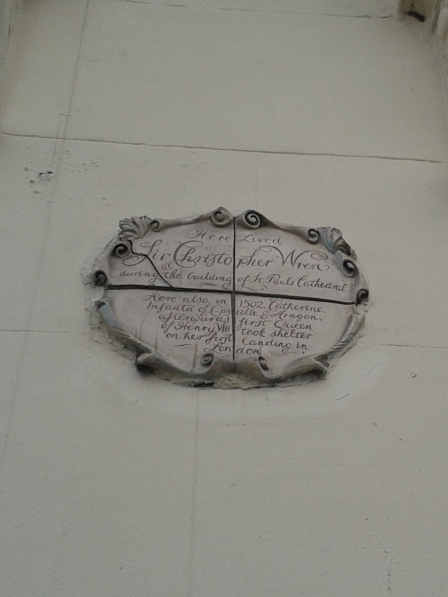 Which, if squinting isn’t a help, reads, “Here lived Sir Christopher Wren during the building of St Paul’s cathedral. Here also, in 1502, Catherine Infanta of Castile and Aragon, afterwards first queen of Henry VIII, took shelter on her first landing in London.”

Which already would have been cool if it was true, but is even more cool since it’s a pack of lies!

A little historical digging, starting on the internets and confirmed in some more official records, leads you down the most glorious, London-y-est, twisty, and complex turns. First of all, the house on the site wasn’t built until 1710 which was the year St. Paul’s was completed – making it pretty hard for Wren to have lived there while he was building and totally impossible for the long suffering Catherine of Aragon to have stopped by at all.

To be fair, Wren did live up the road a few houses, but not at this particular bankside address. But in any event this placard (which as it turns out is a recreation of an earlier one that has disappeared) seems to have originated on a nearby building – which historians are unable to determine was or was not the site of Wren’s house. When the building was demolished, an intrepid local salvaged Placard 2.0 and hoisted it onto his own house.

In the final twist, this area of London was bombed heavily during WWII and was considered to be a less desirable part of town in general (I’ve mentioned before that we live in a former Dickensian slum, yes?) So after the war the powers that be were thinking of ways to improve the neighborhood. Postwar, and currently this usually meant bulldozing the damaged history bits and putting up new developments…

The placard ensconced in the stone made them wary that they might be tearing down a culturally relevant site. And though sometimes weighed down by bureaucracy, the Brits usually bow to their own history.

Thus this Stuart era house – where Christopher Wren did NOT live, and Catherine of Aragon did not break her journey – stands. Impervious to historical accuracy, Hitler, and planning councils!

One thought on “Lies, Damn Lies, and History”