“I wonder if we are seeing a return to the object in the science-based museum. Since any visitor can go to a film like Jurassic Park and see dinosaurs reawakened more graphically than any museum could emulate, maybe a museum should be the place to have an encounter with the bony truth. Maybe some children have overdosed on simulations on their computers at home and just want to see something solid–a fact of life.”
― Richard Fortey, Dry Store Room No. 1: The Secret Life Of The Natural History Museum

The weeks are passing so quickly these days that it’s a little breathtaking, we glance up and it’s the last day of September already.

On Friday I went to the Bermondsey Antique Market, partly to find a wedding present for a freelancing client who has become a good friend, and partly because I was finally over that cold and needed to just get out of the house for a walk. Luckily I emerged victorious and with a croissant in hand. Breakfast of champions. The Bermondsey market is tiny compared to it’s more famous cousin Portobello Road, it all fits into one square, but the quality of goods is very comparable (and frankly some of the prices are loads better). The antique silver is excellent and some of the jewelry blew me away. There are also excellent niche stalls with pieces from the Far East, vintage clothing, and a fun group who collects and sell mid-century furniture. Friends should prepare themselves to receive Bermondsey Market’s offerings for a myriad of birthdays and holidays.

That night I went to the Natural Science Museum for their annual Science Uncovered event and had a blast! The building was filled with stands and kiosks where researchers from the museum brought out their favorite samples and specimens from behind glass to talk about and present to visitors close up. In addition universities and institutes from all over the UK and European Union had stalls and presentations on the work they were doing, the whole point of the event is making scientists available for plebes like me to march up and demand that things be explained.

Some of the most memorable people I talked to included a researcher who mapped genetic concentrations of people within the UK and Northern Ireland. For example, apparently the Romans didn’t do much genetic mixing during their stay in Britain, they’ve left virtually no trace. In Wales and Cornwall on the other hand we see some of the highest concentrations, meaning that people from that area tended to stay in that area instead of move around, even after industrialization. There was also a way to check where your family names have been concentrated highest for the last two centuries. Suffice it to say my ancestors on both sides appear to have been genetically slutty and highly mobile, while Jeff comes from a a more rarefied group who stayed concentrated in the south of England like dignified people. This mapping also shows where the family names are concentrated outside of the UK, Virginia and Idaho for Jeff. Australia and Arkansas for me – ozarks and convicts! If ever I wanted proof my blood is trouble, I’ve got it!

I also spent a good 45 minutes chatting with a researcher who works on kidney disease and found it absolutely fascinating, believe it or not. Turns out that cleaning the blood (while vital to our survival) is only about 5% of what they do, other major tasks include signaling bone marrow to produce new blood cells and cooperating on insulin management. Upon request she took me through the process of dialysis and then explained why it was such a bad treatment in so many ways. I learned ton and it was fun to get one on one knowledge from a person who was unabashedly enthusiastic about their research.

After that I sort of snuck myself into a tour on human evolution and species development which was a lot of fun (fun fact, the tiny percentage of Neanderthal genetic code most people of European descent have swimming around in their chromosomes comes not from the period when Homo Sapiens and Neanderthals were sharing the same areas in Europe, but from several thousand years before when we first met up in the Middle East as we were starting to migrate out of Africa. Apparently after a bit of hanging out together we largely went our separate ways). And then I wandered down the side corridors for the “science on a soapbox” stations, where scientists and researches literally stood on boxes and took questions from onlookers. I heard fascinating mini-lectures on whether the monetization of conservation efforts has been for good or ill,  whether a mission to Mars is even a good idea, a humorous take on popular views of science and scientists, and why the Dodo has been physically misrepresented for centuries. 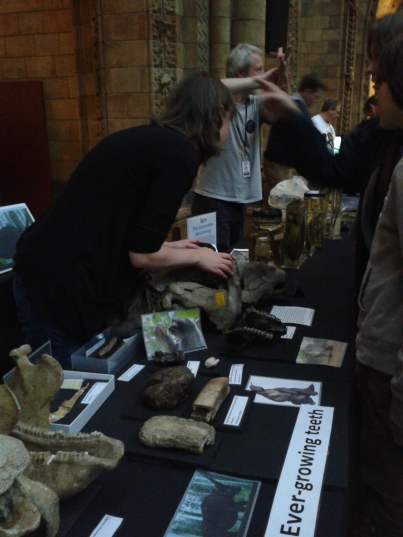 It was great fun. It was also kind of hilarious to see how loud and enthusiastic everyone was in a space that’s typically more solemn and quiet. I suspect the plethora of open bars had something to do with it. But if you’re a learning enthusiast and ever in town, it’s a great late night event. There is plenty there for kids as well as adults, the restaurants and cafes are open, and the spirit of inquiry and exploration is actively encouraged. Best of all, it’s free.

Dippy (face of the museum and prized Diplodocus) says hi!

2 thoughts on “Night at the Museum”