I’m going to say it, I was blown away by how little I was blown away this year.  Once again, I was surprised to see how many of the presenters were better frocked than than the stars up for awards, quelle horreur!  As we speak stylists and assistants are cringing and bracing themselves for the Louboutins to come sailing at them.  Too many of the gowns were relatively colorless, and frankly more than a few people had major fit and styling issues – which means we have so much to talk about.  Grab your junk food of choice and tell me what you thought of the frocks!

Darkness and light!  The Dior was early in a long list of white, pale, blush, nude, and pastel dresses, but I think this was by far the best.  The fabric pattern give it some texture, and she looks as tall as an Amazon.  I personally loved the backwards necklace, very Old Hollywood.  Kidman brought some much needed va va voom to an otherwise fairly tame RC. 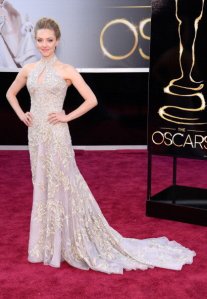 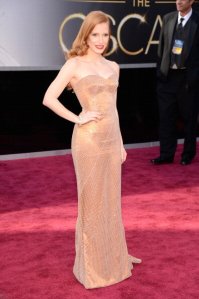 The pale frocks just keep rolling on.  The McQeen was actually a lovely lavender and the only issue I have with her is that her makeup matched the gown too much.  Chastain makes the cut because she frankly struggles on the RC (her baby blue boob monstrosity at the Golden Globes anyone?), and while I don’t love the color on her per se, I do love the color.  Hair and jewels are flawless.

“I’m sorry, did those other ladies forget to bring the drama?” I imagine Theron said to Watts as they stepped from their limos.  “That’s just fine, darling, because we’re here,” Watts said with a fabulous shoulder toss that nearly decapitated a wayward assistant.  Let’s just all be grateful that finally Dior came through because we all remember the assault in dress form Theron sported a couple years ago, finally la Dior juste!

Oh thank heavens, this thing was filmed after the invention of technicolor!  I have a couple of quibbles about the fit, but Fan Bing Bing is a glorious creature who wear things that mere mortals can’t – her chinoiserie inspired Cannes dress was magnificent, and she looks equally stunning her.  The styling is really lovely.  As for Aniston, I hated her hair but that deep red gown was really gorgeous.

Oh look…another pale gown…goody…  I foresee this being a debate dress: I don’t hate it but I don’t think it’s anything special at all.  Barks’ gown really is beautiful, and you can seldom go wrong with a good black gown…but it just seems a bit too (dare I say) dressed down?  I want it in my closet, but I don’t think I want it on the Academy Awards RC. 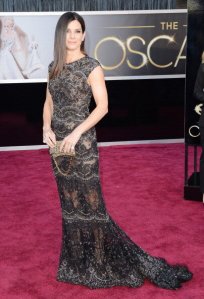 Adele has a specific aesthetic that she seldom deviates from, with good reason, but I don’t think this is one of its best incarnations.  Sandra is wearing a vertical mullet, business on the top…what exactly is happening on the bottom?

Anyone else surprised?  I was surprised.  She’s worn much better in her endless appearances running up to this shindig and her styling has been much better than this.  The detailing of the back, which you can’t see here unfortunately, bag and jewels are lustworthy but let’s run through the list of grievances: first of all another blush tone, second the hair just is not looking its best, and worst of all that seaming.  Anne Hathaway’s chest will be the Angelina Jolie’s leg of 2013, I fear.  As I understand, it already has a twitter account. 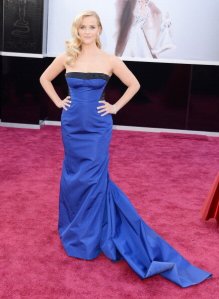 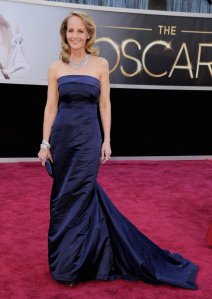 I’ve got the blues, minions.  I hate the side panels in the Vuitton, with a fiery passion.  And Helen…H&M belongs in the mall not on the RC.  Period.  The jewels are lovely but she looks badly fitted and rumpled.

And now I’ve got the nudes – which isn’t nearly as fun as it sounds.  Octavia Spencer has a history and relationship with this house, but I think it they let her down a bit here.  Her gown last year was gorgeous, but frankly I’m getting mother of the bride now.  Doilies should never make it past the front door.  And I have a sneaking suspicion that there is a waterfall of tulle down Stewart’s backside, which I decidedly disapprove of.

Hudson – NO.  Whoever did you hair needs to drummed out of the guild immediately.  I can see nothing else until that is fixed! 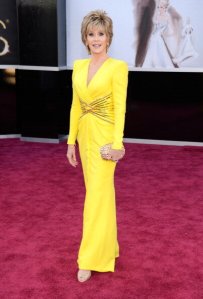 You two clearly have some commiserating to do do over how your stylists should be sacked.  We’ll leave you to it.  Valentino committed more than a few atrocities this year, in my opinion, and no amount of Samantha Barks can redeem these.

Kill it with fire!  I think gray is an undervalued color and actually makes her skin and hair color look great, but the fit is really not good, she needed something much more tailored to her figure.  And, darling, your hair stylist has a grudge against you. 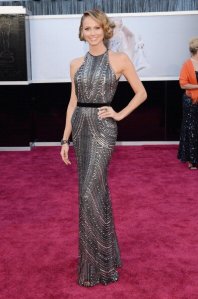 That is some fabulous art deco going on and I approve mightily.

7 thoughts on “Let’s Play Dress Up”

When the city disappears in the clouds.
The alarmists have been right because they’ve been listening. The zealots have not been quiet about their intentions and too many people persist (all evidence against it) that they “don’t really mean it.” That we should take them too seriously. They do and should.
Realising I’ve been mostly inside for over a year suddenly hit me hard recently. I NEEDED to go somewhere fresh and outside. I needed to go somewhere that felt big and vast and green. So dragged @brave_the_earth to Kew for the day.
Why am I like this…
Just as Matt Easton clearly lives in Holland’s head rent-free, so does Holland’s talk in mine, apparently. I am part of the problem. Anyway if the topics of politics, leadership, piety, performativity homophobia, and zealotry interest you at all, my latest therapy dump is posted.
🦊
200k should be the floor. Anything else is moral turpitude.
☀️
It feels absurdly good to be doing recces again and back in east London for the first time in over a year.
You have been notified.
Foxglove love!
Huge love to my brother @johnicusprime and newest sister @madskosman ! I hate the stupid world mess that kept us from celebrating with you, but so so thrilled for your happiness. Can’t wait to party with you both in person. You’re both too pretty for words!