Halfway between Piccadilly Circus and Green Park tube stations runs a fascinating road.  Jermyn Street is traditionally known as for its mens’ shops, specializing in tailoring, outfitting, and grooming London gentlemen for a couple hundred years now, as well as Britain’s oldest cheese shop, and Beretta, gunmakers since the 16th century.  But I’m in a girly mood, kittens, so I’m going to tell you a couple of my girliest indulgence to be found along this London road.

Fortnum and Mason started as an upscale Enlightenment grocery store and went on supplying basic home goods and luxuries to the present day.  Queen Victoria ordered food from it, it supplied troops during the Napoleonic wars, and claims the honor of being the first place in Britain to stock canned beans.  Today its ground floor stocks gourmet teas, coffees, biscuits, liquors, candies, and other taste sensations, all of which make excellent presents (I bought some unusual jams for the girls) for decent prices.  The upper floors, though are the real treats, stocking everything from nice kitchenware and home goods, china and hampers, ladies cosmetics, children’s’ traditional toys, and a truly fantastic men’s shop – which may have given J. some fearful ideas for future birthdays and anniversaries.  The Piccadilly store also has a lovely tea shop that is a great place to go for a treat, as well as four other restaurants to feed you at any time of day.

Floris is a perfumery that has been at this address since the 18th century.  Mary Shelley, Beau Brummell,Winston Churchill, and James Bond (the fictional character, he wore No 89) have all been customers and the shop preserves a lot of old fashioned shopping customs.  For example, it used to be considered vulgar to hand money to customers so to this day if you get change, a shop attendant will pass it to you on a velvet pad.  This place is, understandably, more expensive but worth it if you want a lovely present, or just want to treat yourself.  Many of their concoctions are centuries old, I bought my little sister her birthday present here, a fragrance originally crafted for Queen Victoria on the occasion of her marriage, and was re-released this year in honor of Elizabeth II’s jubilee.  There’s also a men’s fragrance originally developed for a Russian count that’s still sold today!  If you’re really up to dropping some cash, you can have a custom scent created for you – which, I’m not going to lie, I’d love to do some day.

So, if you’re in the mood for a touch of high end shopping, check out Jermyn Street, kittens. 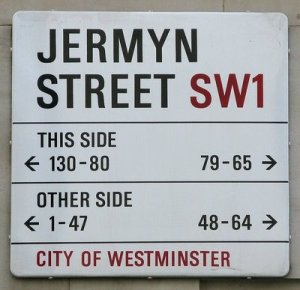 Thanksgiving indeed!
SOON, honey!
🦊
Hoooo boy.
The kind of inspo we all need as the days get short and the nights cold. Link to the blog in the usual.
It has been A Week ™️
While we wait for the formal shots to come through, still kind of in awe of the perfect early fall New York wedding of last weekend. Obviously my feelings were a riot and so the best man and I could only express ourselves by hamming it up between takes. Not pictured: the sheer amount of kit we were hauling. We were READY. #tacticalweddingparty
Manhattan at midnight.
Crashed their first day of marriage for leftover cake and coffee. 10/10 wedding week, no notes.
I shall keep him. #husbandobjectification #itsbeenaminute
We came. We saw. We partied.
Hey sexy.