There are two Christmas films that were highly important to my childhood that have yet to be made into DVDs, and look likely never to be.  They are too old, too somewhat obscure.  Luckily at this festive time of year, as I scour the internet to find presents I invariably trip over treasures. 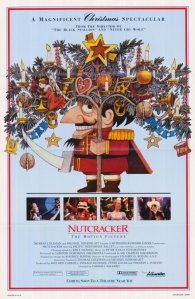 Most of the performances I’ve seen of The Nutcracker have been fairly typical: by area companies of mediocre to good skill, highly traditional, etc.  I’d have to throw you over to Scarlett for an in depth critique of the various productions and recommendations (living as she does in New York).  But my family has an old VHS sitting quietly on a shelf, taken down but once a year so it lasts longer.  This VHS is Nutcracker, the Motion Picture, and it is my definitive adaptation.  It gets played from time to time on PBS, but that’s not nearly enough for me.

What’s not to love?  Maurice Sendak provided production design!  Patricia Barker danced the role of Clara!  It’s a stunner of a film and required holiday viewing chez Small Dog.  If and when this is finally moved to DVD format, I’ll be the first in line, but in the meantime I found a killer deal for a nearly new copy on amazon.com

and practically sprained my fingers in my frenzy to order it.  Everyone should own it, in my opinion, but in the meantime if you’re feeling festive and cheap, you can watch it on Hulu.

My other, more obscure little guilty pleasure is an old live action version of Beatrix Potter’s The Tailor of Gloucester (which I personally believe is one of best Christmas stories).  It stars Ian Holm as the tailor, with Thora Hird as the Mayor’s housekeeper, and even a young (gangly, awkward, with no hint of his future attractiveness) Jude Law.  This is so rare it will run you up to $80 or more…unless you haunt eBay the way I did!  I scored it for $2, and except for some shelfwear on the box, the tape is fine.

There’s no hope of this ever being made into a DVD, it was a made-for-TV production back in the 80’s.  For lack of another term, it was made cheaply.  It’s for young children.  It’s old.  And it’s completely charming and necessary for my household.

Disclaimer: yes I know magic machines exist that can convert VHS to DVDs and there is a very important reason why I haven’t employed them: I’m lazy.  Plus, recall what happened last time I used one?