“This is always going to be a problem for us, you know.”
“How do you mean?”
“Well in June there’s your birthday, July our anniversary.  And then November is my birthday, followed by Christmas.”
“Oh my.  We did not time that well…”
-J. and C. 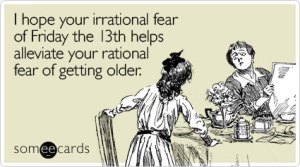 J.’s birthday is tomorrow, and oh the problems!  I ordered his present weeks ago, and after much angst that it wouldn’t come in time, I happily opened the mailbox yesterday to find it snuggled inside along with my mother’s christmas present (Poverty means that you have to buy presents in conjunction with paychecks.  The more people in your life, the more paychecks you have to start thinking ahead.  I have to think very far ahead).  I got it inside, past J.’s grabbing hands and demands of, “What did you get me?!” and snuck it into its hiding place, when an Awful Realization struck.

I think J. may already have what I got him.  Uh oh…

Never mind!  He’s under orders to appear absolutely thrilled in front of my in-laws and I will quietly exchange it later if it is in fact, as I fear, a double.

Another realization that struck me this past week, though not as awfully as the first, is that I am now in charge of J.’s birthday.  His last one we celebrated at his sister’s house complete with parents and four nieces and nephews (which I have now inherited) and it was definitely his parents’ show.  This year it’s my job.  Which meant a frantic scramble to call up Darling and my sister-in-law to coordinate a family get together.  Today I ordered the cake he wanted (thereby pushing Gio and Buddy’s presents to next paycheck’s shopping list.  I’m already behind!) and am I hoping haven’t forgotten anything else.

Freezing rain the blazing hot in a week. Never stop doing you, Britain!
🤤
Never not here for bees in blossoms.
It’s cinco de mayo and I’ve just been hailed on. The great British summer is upon us!
And no credit to the cat, typical.
The three genders.
I always feel like somebody’s....
Outside again, with (blue) bells on.
I have emerged from two days of an aura migraine (first in months) and feel the need to remind myself that I’m alive. Also to make up for several days lost calories. Tonight, we feast!
OUTSIDE. With bonus hope.
Remembering Greece. Probably our best holiday. Bonus husband objectification for you all.
Me, watching WandaVision...