“Ah, Cindy Sondheim, you should have lived in an earlier age.  Things were simpler, less complicated.  Do you know how many women had nervous breakdowns in the fourteenth century?  Two.”
– Love at First Bite

Thanks for all the lovely pick-me-up comments yesterday, darlings.  It was really nice to know how many of you have felt the same way – and as every last one of you have turned out amazing and unbelievably fabulous, I’m pretty sure I’ll be able to do the same with a bit more time, a few more naps, and much less stress.

Yesterday was beastly (if you couldn’t tell!).   We’ve heard negatives on some of J.’s  internship applications and are still waiting to hear back on others, which is almost more nerve wracking.

I had to hire a dozen students last minute and despite telling administration multiple times that we don’t have space for any more people, they were still shocked to discover that we didn’t have enough lockers or uniforms/gear for them.  Unfortunately, the ones ending up looking foolish in this situation are your friendly neighborhood C. and Hennessy, who have to explain to several students why they have to cart a pile half as tall as me of gear home with them.

I barely averted a few violations that would have added up to potentially thousands of dollars in fines had I not caught them.

I’d only got four hours of sleep the night before.

So, these and other factors combined into the perfect storm.  Literally!  Just as I was getting ready to go do the laundry run, a massive lightening and rain storm whipped up.  You may recall how often it rains when I do the laundry run, it’s lately become the office joke.  So when I ambled past Susie’s office to tell her I was heading out I glanced our her window and froze.  It was pitch black outside and rain was lashing the pane. 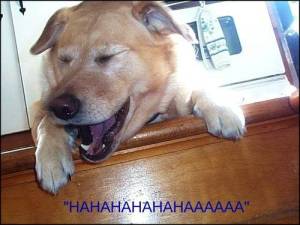 I felt a helpless, hysterical giggle start bubbling up inside of me and a clapped a hand over my mouth to keep it in.  But to no avail!  Both Susie and Wise turned, saw the rain, and started chuckling.  Then Chief poked his head around the corner and grumbled, “Have you done the laundry yet?”

That did it.  I collapsed on Susie’s desk laughing (and nearly crying).  She and Wise joined in, Chief stared at us a minute before retreating to the safety of his office.  When I got home, I put on flannel pants, an oversized sweatshirt, pinned my hair up, and crawled into bed with a book.

“Mws. Venice, I can’t find my pants anywah!”
-one of her students who can’t pronounce his R’s

Having finally let go of (most of) my rage about the incident I am about to relate, let me share the tale of The Brotherhood of the Traveling Pants.

One of my less enviable jobs is doing the laundry for the department.  When I first started we were with a company that picked up and delivered our stuff as part of their service, which we loved.  However over time we found their service also included the smashing of zippers, losing of uniforms, discoloration of the same (most memorably turning some silver patches a most ungentlemanly shade of pink), and dishonesty about accounts…all of which served to outweigh the convenience of delivery.  After various warnings, cajoling, and threats, we switched to a new dry cleaner.

With tolerance for laundry mistakes at an all time low, I honestly expected some officers to be annoyed with longer-than-usual turnarounds, etc., during the switch.  I did not expect that Lt. South would come to me about clothing that was missing almost immediately.  This happened three weeks ago…and instantly the scandal took over my work life!

Without fail, three times a week South lectured me about locating their clothes before we staggered out the door burdened with laundry baskets.  Then off to the cleaners with Hennessy where we were lectured on how they are a model of integrity, business acumen, whatever…but still unable to find the missing items.  Back to the office  to be subjected to scorn for failing to find four shirts and three pants (because the loss of those items by the individuals or the cleaners is clearly my fault).  Cue the Chief and Lt. Figaro both taking me diplomatically aside to urge me towards “better efforts” in finding the articles.  Week 2 rolled around and we escalated to South going down to the cleaners, to bully them into finding his pants I suppose, and the cleaners immediately seeing this as antagonistic (no idea why) chose to punish me and Hennessy with ever louder defenses.  We were ordered to carry increasingly vicious responses back and forth and adequately punished by both sides for thm…a double case of Shoot the Messenger.  According to their records, South’s pants had been signed, sealed, and delivered.

Honestly, I believed the cleaners.  I’m convinced that half of the lost/misplaced problems we had with our last cleaners were purely officer operator error.  The guys wouldn’t label their things, or just do it improperly, find items that didn’t belong to them but neglect to turn them in, and never failed to whine to their lowly secretaries when a problem arose that us girls literally had no control over.

By week three I was so sick of the heckling, whining, and lecturing that I yanked Lt. Colossus head out from where it was buried in the sand and flat out ordered him to get us a master key to go through all the lockers in case any of the missing clothes had managed to find their way into them.  Sure enough, one pair of pants had meandered into Lt. Citrus’ shirts…the which he entirely neglected to mention even though Wise sent out two emails asking any unclaimed or unknown stuff to be turned into us.

That left two.  I spent nearly twenty minutes talking the cleaners off their Righteous Anger ledge with Hennessy before we trudged back to the office emptyhanded again yesterday.
“Well?” demanded South as we stumbled into the office laden with laundry not belonging to him.
“No luck,” I said, “They’ve asked you to call them so they can work out restitution–”
“They can call one of you, that’s what you girls are for,” he rolled his eyes.
I could have gleefully disemboweled him with a hanger!

AND THEN!  This morning, Susie came up to me as I was giving a pants update to Aims and Sport.
“You’ll never guess,” she breathed almost maliciously.
“You’ve found them!” I gasped.
“South did…in his home closet.”

I felt my face drain in anger.  I’d spent three weeks getting abused by my supervisor, lectured by my boss, barked at by our dry cleaner, dragging my friends an co-workers into it, being slapped in the face with my own lowly station as a secretary maliciously and repeatedly, and forced into the roll of Resident Wench On Behalf of the Entire Department.  I’d spent several hours delivering laundry, trying to ameliorate irrationally angry people, and leading a witch hunt for pants thieves…only to find that the man who had started it had FAILED TO LOOK IN HIS OWN CLOSET?  Moreover had failed at any point in the last month to check and see if he already had the items, convienently marked “Delivered?”

Apparently my wrath has an effect.  After trying to joke once about how the last three weeks “gave me something to do” and being met with my evilest of vicious stares, he hasn’t been seen in the front office all day.  In fact he’s been using the back hall to get around instead.  Good.