“Though she be but little she is fierce.”
– William Shakespeare

The other day Jeff was getting dressed and reached for a shirt of the drying rack, while still not too terribly awake. I know this because I came out from brushing my teeth in the bathroom when I heard him laughing to discover he had tried to put on a shirt of mine instead of his own, which apparently are awfully similar in color and pattern. (Personal note: must do something about this because one of the most odious things a couple can do in public is dress alike.) 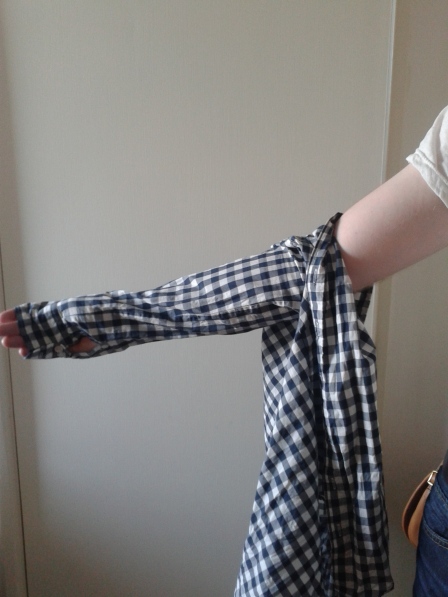 That’s right. His forearm is the length of my entire arm.

Visuals like this often throw me because I don’t feel particularly short or small most of the the time, even though I know I am. Other recent height issues lately include me buying too much contact solution because I’d thought we’d run out when in fact Jeff had stored it on top of a cabinet out of my line of sight, and him walking into the kitchen and burst out laughing because he found me standing on a counter so as to rifle through items on the top shelf of a cupboard that I could not otherwise reach. Shortness, a never ending source of exasperation on my part and amusement on his.

The kind of inspo we all need as the days get short and the nights cold. Link to the blog in the usual.
It has been A Week ™️
While we wait for the formal shots to come through, still kind of in awe of the perfect early fall New York wedding of last weekend. Obviously my feelings were a riot and so the best man and I could only express ourselves by hamming it up between takes. Not pictured: the sheer amount of kit we were hauling. We were READY. #tacticalweddingparty
Manhattan at midnight.
Crashed their first day of marriage for leftover cake and coffee. 10/10 wedding week, no notes.
I shall keep him. #husbandobjectification #itsbeenaminute
We came. We saw. We partied.
Hey sexy.
I love the way he loves my big sister. Welcome, Yaz. You’re stuck with us! 😈😈😈
Since we’re doing this in Manhattan…
Bring on fall, I’m ready!
Guess which belongs to who!